Carolina Duarte and Jaime Moreno conceived and designed the experiments.

Introduction: Neisseria meningitidis is one of the leading causes of bacterial meningitis. In 2013, an increase in invasive disease caused by N. meningitidis serogroup B occurred in Cartagena, Colombia.

Objective: The aim of this study was to characterize serogroup B isolates recovered from patients with meningococcal meningitis in Cartagena during 2012 and 2014.

Conclusion: The clinical, epidemiological and molecular characterization of meningococcal disease is necessary for understanding the spread of virulent meningococcal clones and for facilitating the early detection of cases to reduce epidemic risks.

Neisseria meningitidis has become the leading cause of bacterial meningitis in children, especially after the introduction of Streptococcus pneumoniae and Haemophilus influenzae type b routine vaccination (1). There are 12 serogroups of N. meningitidis ; however, the majority of invasive meningococcal infections is caused by serogroups A, B, C, W, X and Y, and the distribution varies with the geographical location and the age group (2). The overall incidence of meningococcal disease differs from one region to another ranging between <2 cases/100,000 population per year in the United States, China and European and Latin American countries, and >10/100,000 population per year in some African countries (3,4).

We performed genotyping on the 19 isolates using the bacterial rep-PCR-DiversiLab kit (Bacterial BarCodes, bioMérieux Inc., Houston, TX) following the manufacturer´s recommendations. We analyzed patterns by using the Pearson correlation coefficient to create a dendrogram of the genetic relationship among isolates (9). Clusters of rep-PCR patterns exhibiting a similarity of >93% were designated by capital letters. Additionally, we included data from the Multi Locus Sequence Typing (MLST) site for four isolates recovered in 2010 (isolate 858), 2011 (isolates 903 and 905) and 2012 (isolate 926), which were studied as part of a SIREVA II Latin American project. MLST was performed according to the methods of Maiden, et al . Primers, as well as the determination of sequence alleles and the designation of sequence types, were retrieved from the MLST website ( http://neisseria.org/nm/typing/mlst ).

The 25 N. meningitidis serogroup B isolates were sent by six hospital laboratories, but 50% of them were recovered in only one hospital. All patients came from a geographically defined area in 12 of the 250 city districts characterized by high levels of poverty and low educational levels. 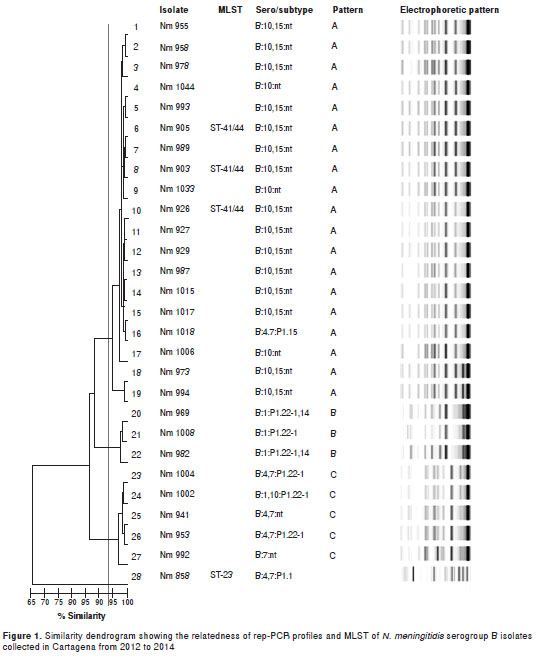 Using molecular techniques, we characterized invasive N. meningitidis serogroup B isolates that had circulated in Cartagena as part of a meningococcal disease epidemic affecting low socioeconomic population groups considered at high risk for the disease (10). Serogroup B has become a recent threat with sporadic, endemic and epidemic occurrences being recorded in North America, Europe, South America and Australia (5). From 1987 through 2012, 680 N. meningitidis isolates were confirmed in Colombia by the Microbiology Group of the Instituto Nacional de Salud, of which 72.2% (n=491) were serogroup B (6).

Overall, isolates were susceptible to most of the antibiotics tested. SIREVA II data showed that between 2006 and 2010, N. meningitidis isolates recovered in Bolivia, Colombia, Ecuador, Perú and Venezuela corresponded predominantly to sero- groups B and Y (41.7% and 29.1%, respectively). Decreased sensitivity to P was found in 17.1% of isolates (16.1% intermediate and 1.0% fully resis tant isolates) while all of them remained highly susceptible to RIF (99.5%) (11). A systematic review of the effectiveness of different antibiotics for prophylaxis against meningococcal disease found that penicillin and rifampin proved effective for eradicating N. meningitidis ; however, the use of rifampin may lead to the emergence of resistant strains (12). Therefore, antimicrobial chemopro phylaxis for close contacts of patients with invasive meningococcal disease could be important to prevent further cases (12).

The information on the distribution of N. meningitidis serogroup B isolates serosubtypes and serotypes is important in evaluating the possibility of using outer membrane protein (OMP) based vaccines to control endemic meningococcal disease (13). However, the variability in OMP strains causing endemic disease will likely limit their usefulness (10). The main serosubtype and serotype (B:10,15:nt) identified in this study differ from those in the vaccines currently licensed: The Cuban VA-MENGOC-BC vaccine, which was developed from the outer membrane antigens of the epidemic strain type B:4:P1.15 combined with serogroup C polysaccharide (14 ), and a multicomponent serogroup B meningococcal vaccine (4CMenB), consisting of factor-H binding protein (fHbp), N. meningitidis adhesin A (NadA) and Neisseria heparin binding antigen (NHBA), combined with outer membrane vesicles from the New Zealand epidemic strain NZ98/254 (B:4:P1.7b,4) (15). This vaccine was approved for use in the European Union and Australia, and has been found to be safe and immunogenic in a Latin American adolescent population (10,16). The predicted protection of this new vaccine is dependent of vaccine antigens expressed by strains causing disease in different geographical settings, therefore, fHbp, NadA and NHBA genetic typing of invasive N. meningitidis serogroup B isolates is required.

A limited number of clonal complexes are responsible for the majority of the disease cases associated with outbreaks or epidemics. In our study, the most common clonal complex was ST-41/44, found in 64.3% of cases. The ST-41/44 is the most diverse clonal complex associated with serogroup B meningococcal disease, and the analysis of available MLST data showed that the most common serotypes in this complex are 41, 44, 42, 40 and 154 (5). This clonal complex has caused epidemics in the Netherlands and New Zealand and was the dominant cause of invasive meningococcal disease in Ireland, Belgium and Italy (5). In Chile, the ST-41/44 complex, mostly associated with B:P1.19,13-1, showed the highest prevalence (29.0%), (17), while in Argentina, only 7% of the serogroup B isolates in 2010 belonged to the ST-41/44 complex (18).

Phenotyping and genotyping methods are impor tant for meningococcal transmission studies and epidemics early detection. Additionally, molecular surveillance is crucial to identify genotypes indicating disease common sources, as well as to determine the antigenic profile and clonal diversity of N. meningitidis isolates associated with invasive disease, and to monitor the evolution and distribution of meningococcal serogroups and clones in order to provide information for future vaccine development.

The authors thank Elizabeth Castañeda and Clara Inés Agudelo for their critical review of the manuscript and Orlando Castillo for his help in data management. We also thank the personnel of hospital microbiology laboratories in Cartagena for identifying the N. meningitidis cases and sending the isolates.

None declared by the authors.

This work was financed by the Instituto Nacional de Salud, Bogotá, Colombia. The funders had no role in data collection and analysis, decision to publish, or preparation of the manuscript.